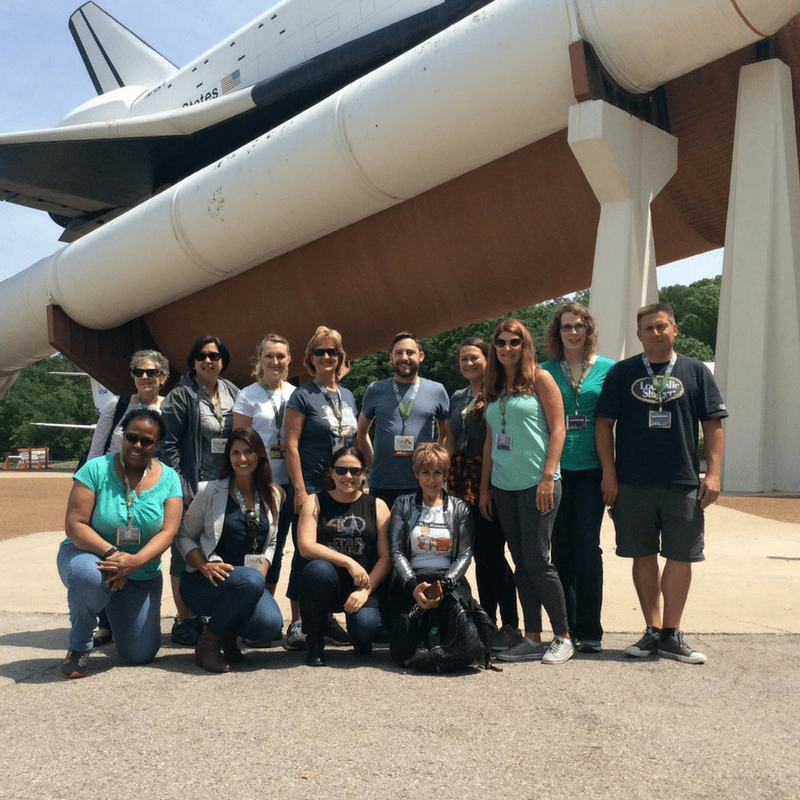 It’s the T Minus countdown that trips us up multiple times. The landing part is smooth. The launch pretty much textbook. But then a mechanical failure threatens the entire mission and time gets jumbled. Over and over. I wonder if the astronauts at first have this much trouble. Something tells me they do not struggle with this simple task the way we do at space camp.

Why Am I At Huntsville’s Space Camp?

We, are a group of influencers, travel writers gathered, two days prior to the launch of TBEX travel Bloggers Exchange conference in Huntsville, Alabama. We are a strange crew from around the world. A Danish travel writer, a Brazilian Youtuber, several Americans and at least two Canadians. Some have been writing for a decade or longer and some just began last year. Today we are doing Space Camp in Huntsville, Alabama running through a couple of simulated space missions as if in space.

Interested in doing this yourself? Viator has admission tickets to US Space and Rocket Centre. (affiliate link) 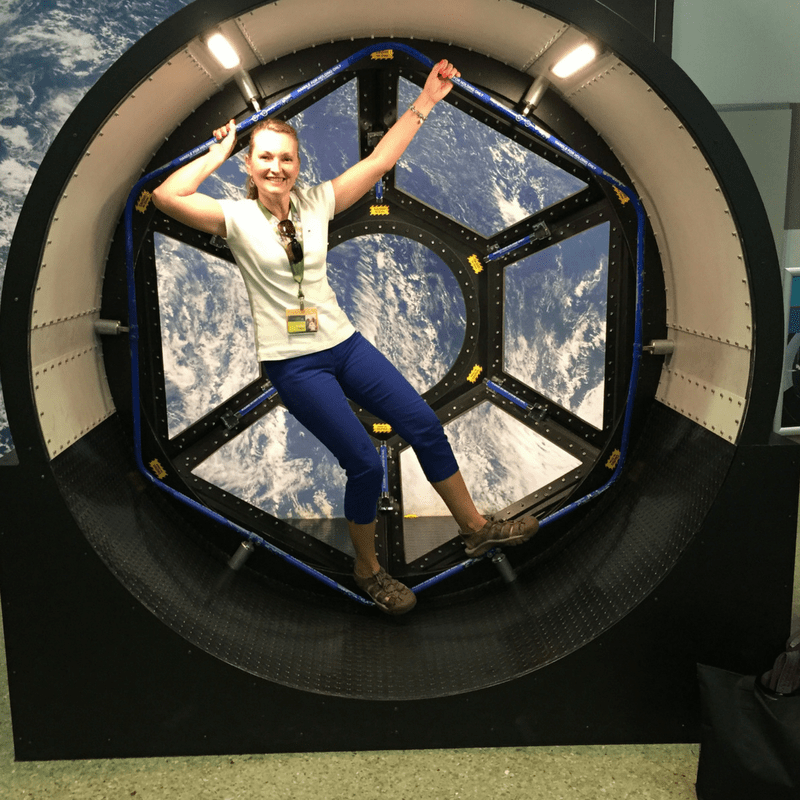 At the start of the day we are given a quick lecture of sorts and an introduction to Huntsville, Alabama Rocket City Space Camp. In the United States there are three central hubs of activity for space training. There’s the Space Cape of course in Florida, then Houston, Texas and finally Huntsville, Alabama.

On the City of Huntsville

Huntsville, Alabama is one of the smartest cities in the entire USA. It is a treasure, maybe a bit hidden to many, but well known to those in the south. But if you live in this world of STEM or STEAM, science, technology, engineering and math then you’ve probably heard of Space Camp and its many variations. 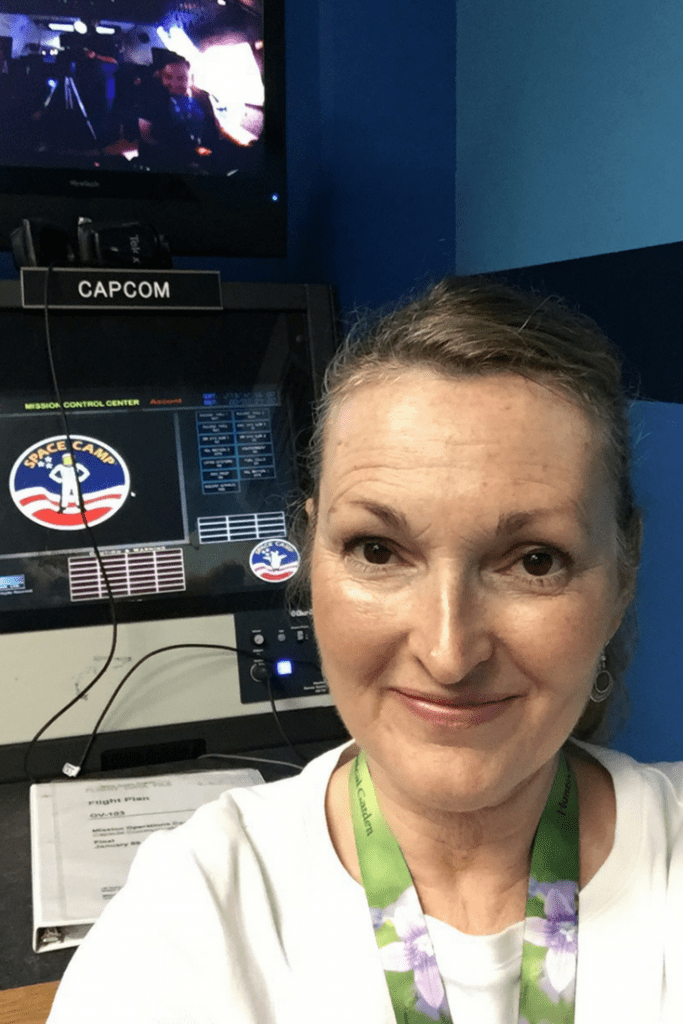 We are broken into groups. The scientists who will do experiments on our simulated mission. Mission control, with CAPCOM (communications) and Payload specialists and of course flight director. Then there are the people flying the shuttle itself. Four bloggers with various talents. An actor, and Snapchat celeb, a pilot, a new travel blogger and a veteran travel writer too. 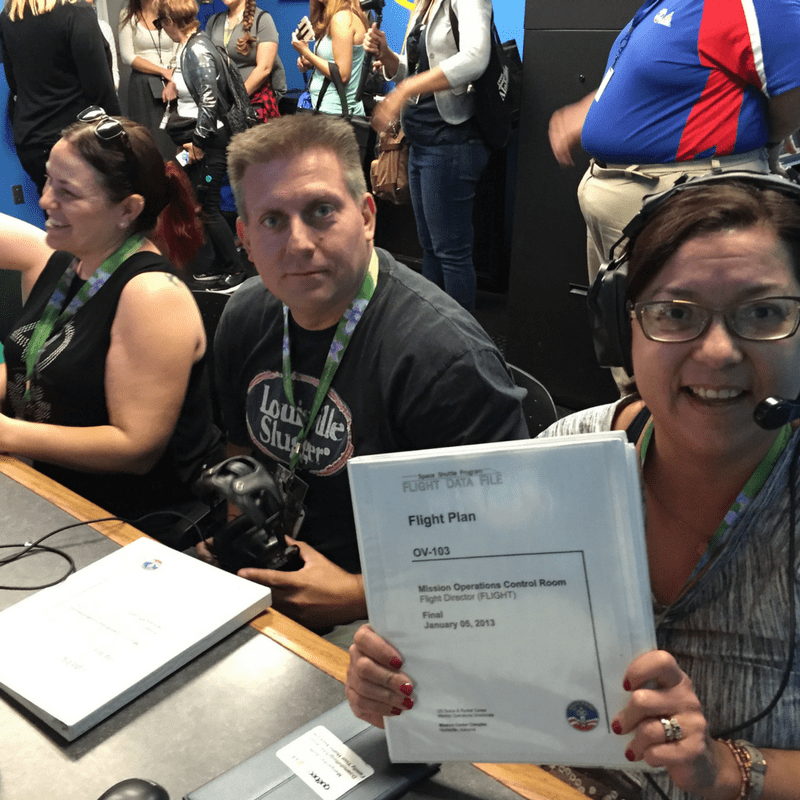 I am traveling with a friend, and fellow lifestyle and travel blogger Margarita Ibbott. After endless flight delays caused by some construction at Pearson Airport in Toronto, our mission seems like it might never begin. We have to be there early May 2nd and it is late May 1st. Delays threaten to sideline us and we are both edgy. But this opportunity is too good to be true.

We stick with the plan and hope for the best and in the end fate has a hand in getting us finally to the hotel where we are staying. This mission will occur after all. Very few slots were available for space camp Alabama so we’re stoked we are in space camp and we made it to base camp.

We assemble at Werhner Von Braun Center and the various travel writers are divided into groups according to the tours signed up for. A quick drop off at the Botanical Center and we are on our way to Space Camp. Impossible to miss this from pretty much anywhere in Huntsville. Look for the gigantic rockets visible from any motel, hotel, or mall in Huntsville. Even late last night we spied it while we were driving down the highway in a taxi. Now here we are.

A brief discussion of how each role in the flight simulator works ends up with me role playing CAP COM. Basically, the communications person. Margarita is flight director.

We receive a big manual of directions and a script. The mission begins on script and we communicate by headset with the team inside the shuttle. We also communicate with each other being sure to follow the directions. This is the first test. Can you think on your feet? Jana of Merlot Mommy is the one tossed into a zillion different scenarios when small things light up and go awry in areas of the shuttle. When the red light goes on then follow this procedure…and the trick is always finding your way back to where we are in the countdown process.

A tour of the US Space and Rocket Center is a day in itself. If you do space camp or family space camp, or even day camp there will be many chances to explore. Camp also comes with lunch and meals at the cafeteria which has some pretty good food choices frankly. The beef was very tender and several salad options are healthy, as are the vegetables. There are several rides outside and numerous Instagram staging spots, or selfie-taking opportunities. But we are not here just for that. 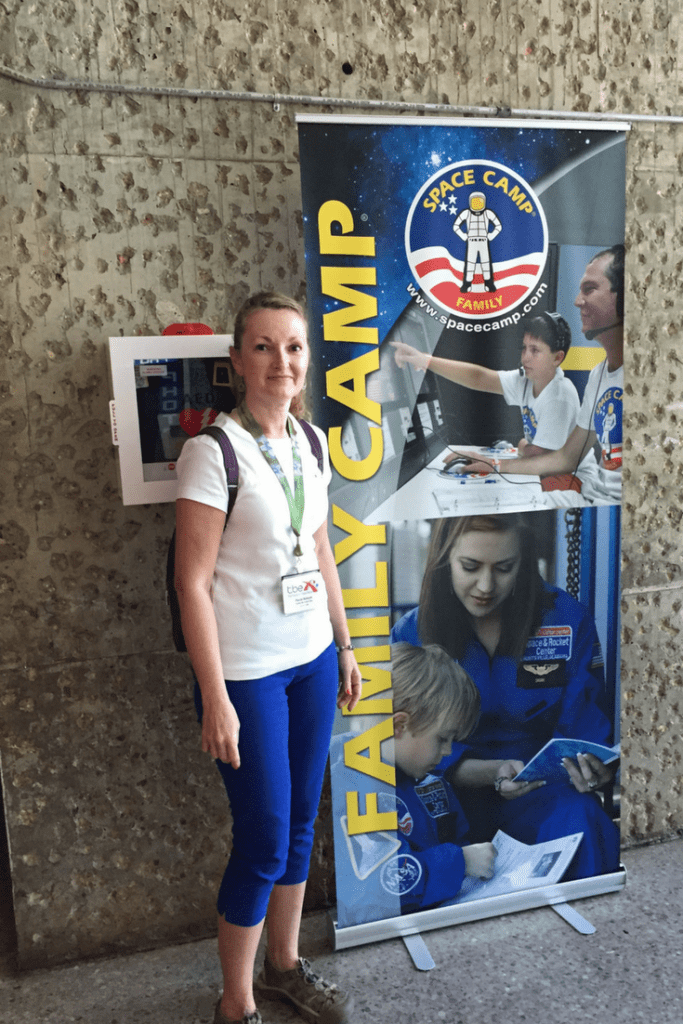 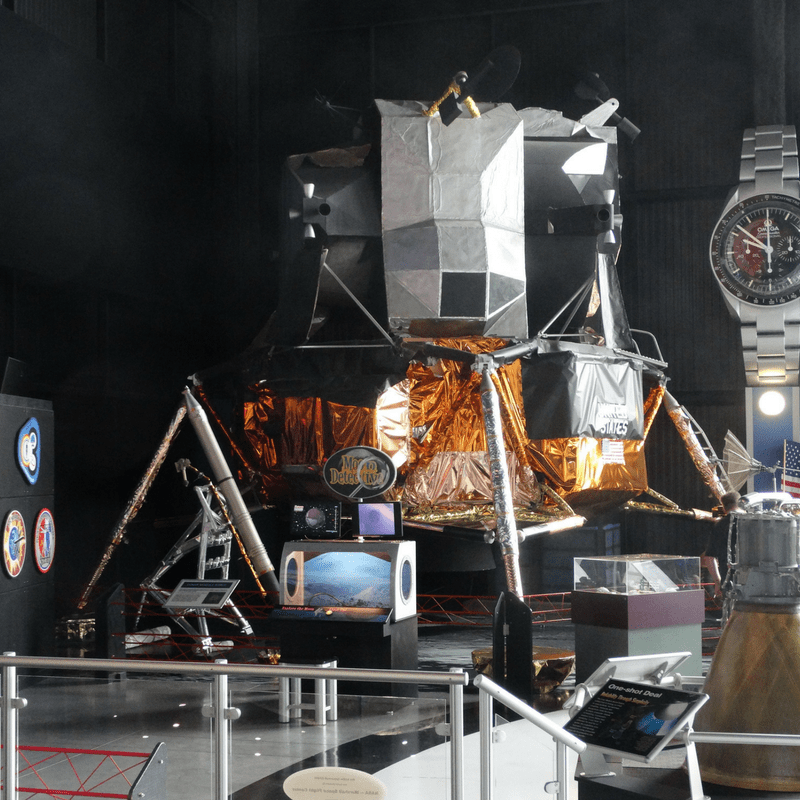 The museum here on site features retired NASA rocket scientists and engineers who will answer any of your questions when you visit. An amazing asset to this facility and the camp too. The museum features activities and exhibits too. It is home to the Saturn V. 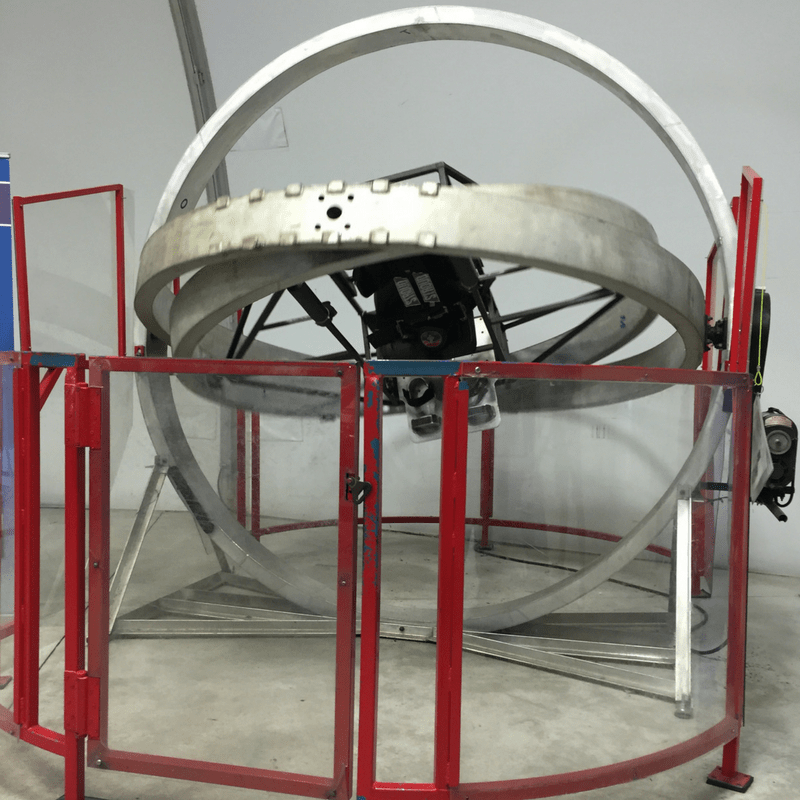 Training on the MAT

Nearby in the same building where the Multi-Axis Trainer sits (MAT), there are several other training machines. Numerous groups of school children talk loudly with each other and occasionally cheer us on, while we each line up for our turns. Kids age 5 to 10 do day camps here all summer from May 29th through August 11th.

I wait until last to strap into the MAT. This training tool spins in all 360 degrees, but allegedly, because it keeps your stomach in one fixed position it won’t make us sick. Which is good, because we are doing space camp and this final amazing training tool right after lunch, in serious Alabama heat.

Bloggers one by one spin dramatically in all directions and wobble off the MAT, some beaming broadly and one or two looking shocked. I am one of the latter, barely lasting under a minute. Not the only reason I didn’t opt for rocket scientist on my career path.

The U.S. Space and Rocket Center contains the Earth’s largest space museum. It is incredible to see. This is also the home to Saturn V. If you are simply making a day of it you might want to consider doing the Marshall Space Flight Center Bus Tour too. Note – you have to be a U.S. citizen in order to be allowed on that bus tour.

MORE ABOUT space camp below – > Click Play to Watch and Learn

The center is home to both the U.S. Space Camp and the almost equally popular Aviation Challenge. Top GUN wannabes from all over the world also come to the Aviation Challenge annually. Participants have come from Australia and Canada routinely to learn and be groomed for a career in the aviation industry. 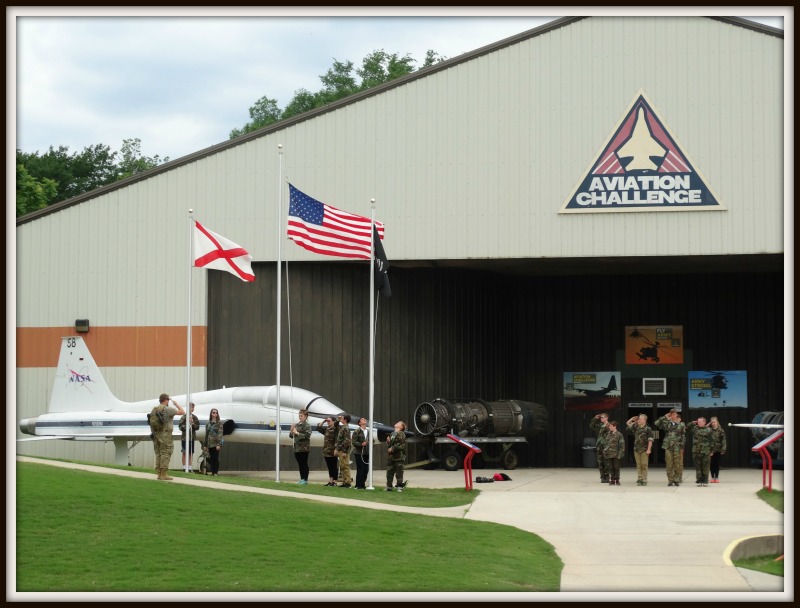 Day Camps, Corporate Camps, Space Camps and Family Camps are offered at the US Space and Rocket Center. You can also explore over 1500 artifacts from America’s achievement in space exploration.

THIS ONE looks awesome to me – 3 days two nights or 4 days and 3 nights from about $1,247 for a family of 3. Add $399 for each additional person and of course you have to get there. Family campers stay on site in space camp quarters.

And in case you were thinking that’s not enough – well there’s also corporate space academy should your business or company be interested in doing a team building activity here. 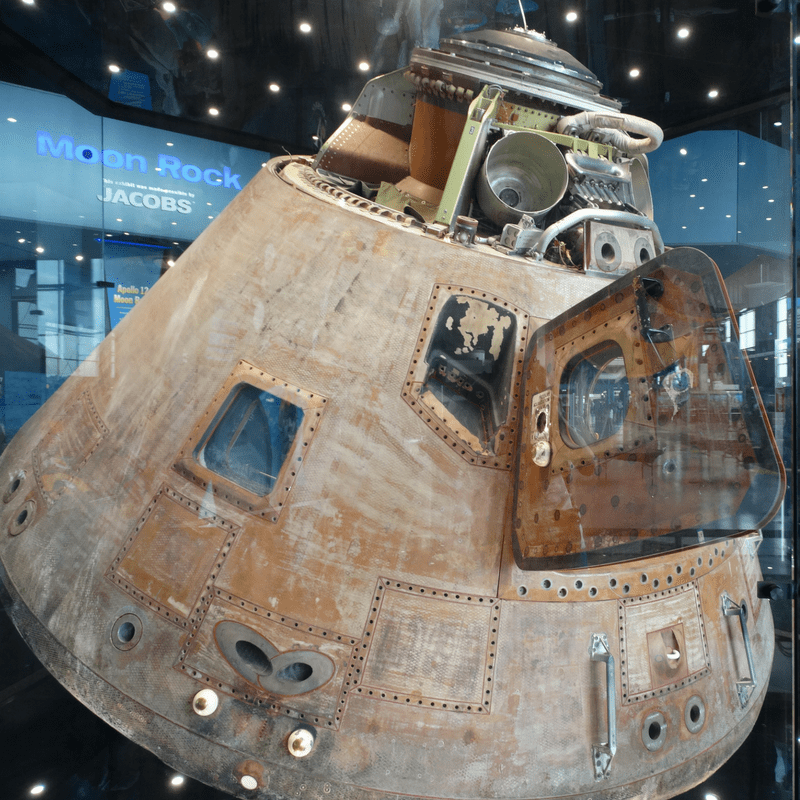 Rocket City will wow you with its vibrant arts and culture scene, its restaurants featuring some of the south’s best cooking and its growing craft beer scene.

We were guests of TBEX and Huntsville Tourism. Many thanks to the US Space and Rocket Center and Space Camp for hosting us. My opinion is all my own and it is also truthful. 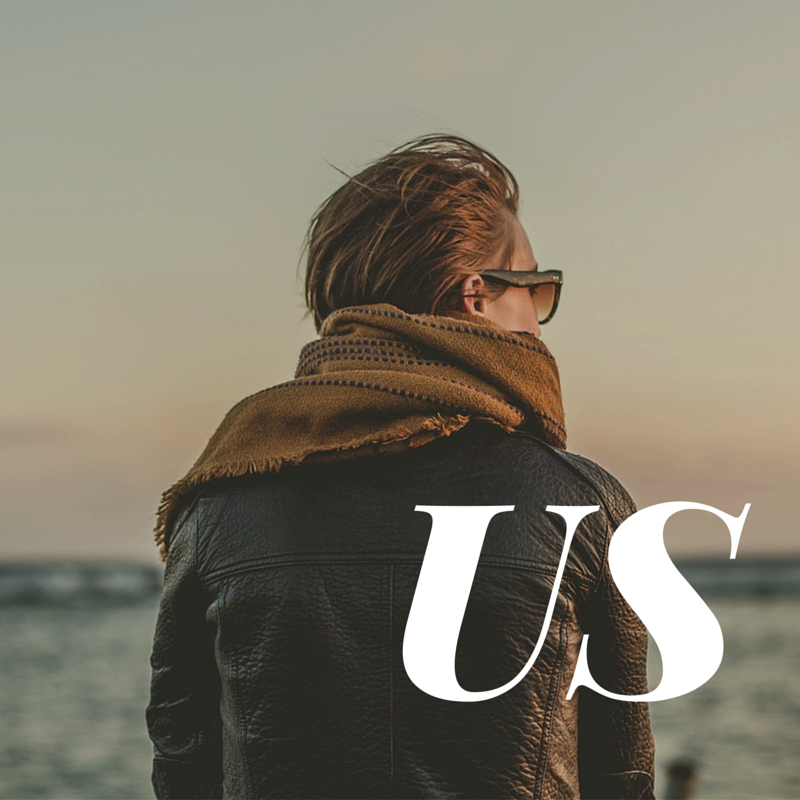 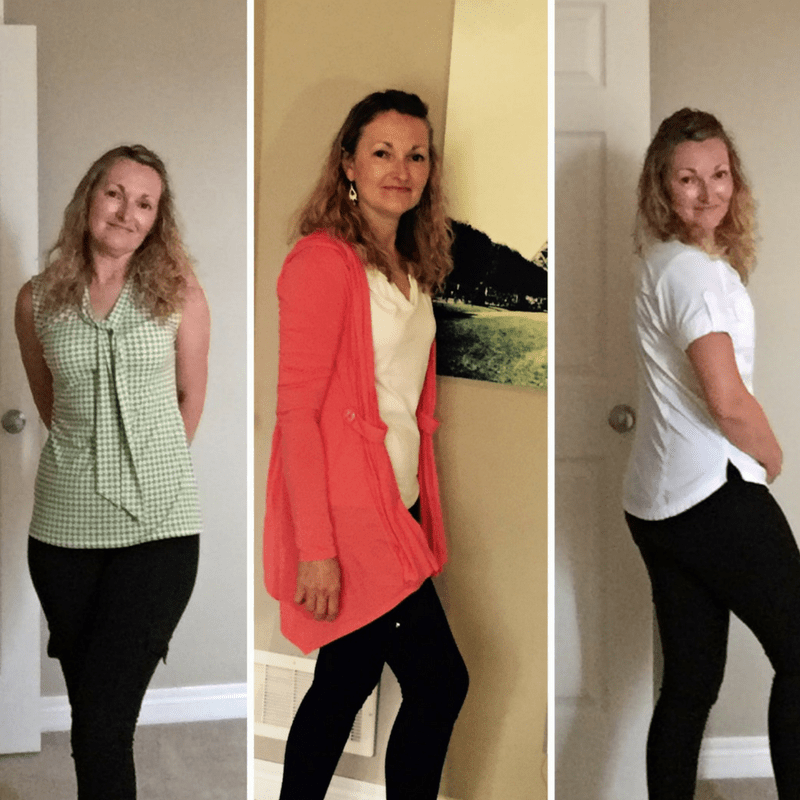 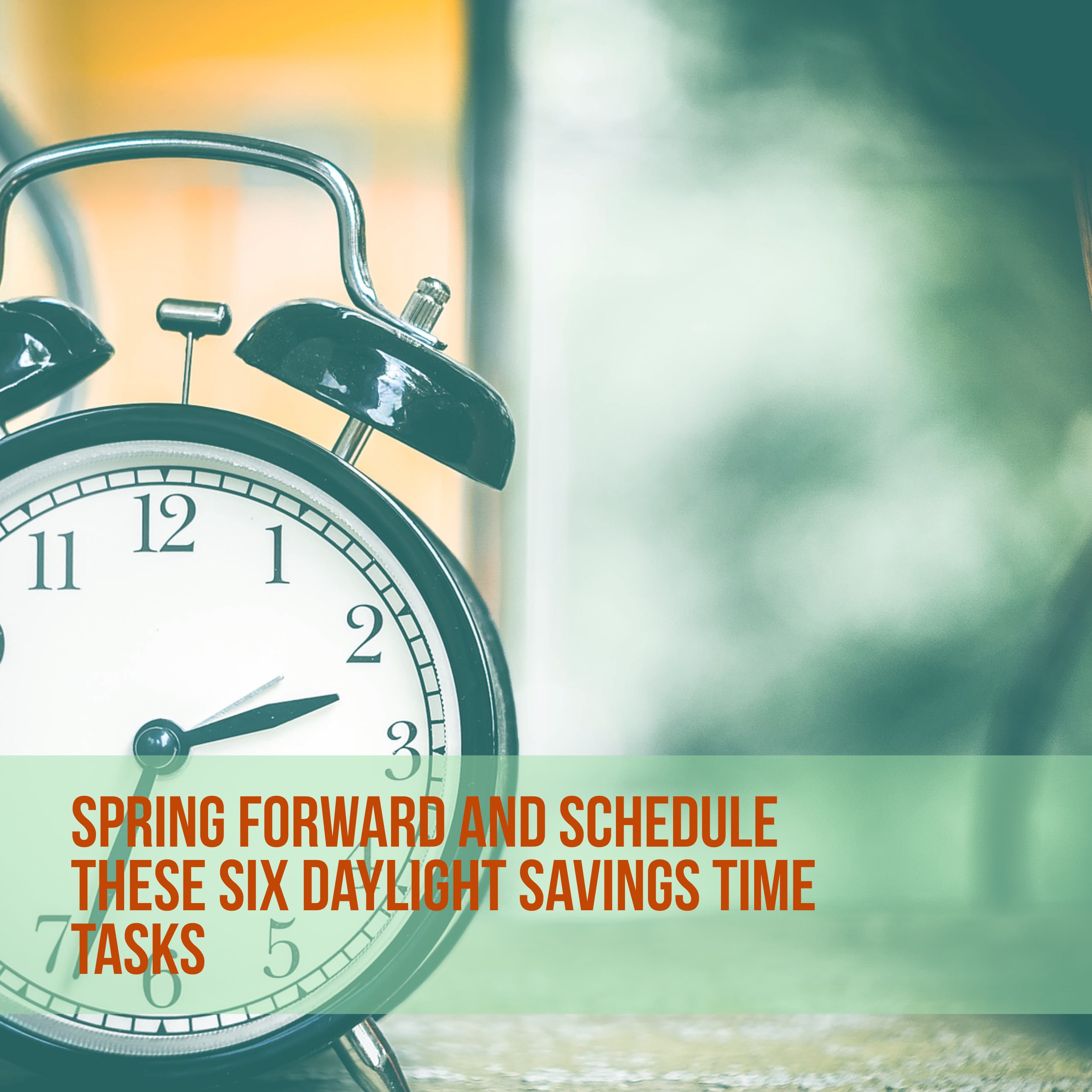