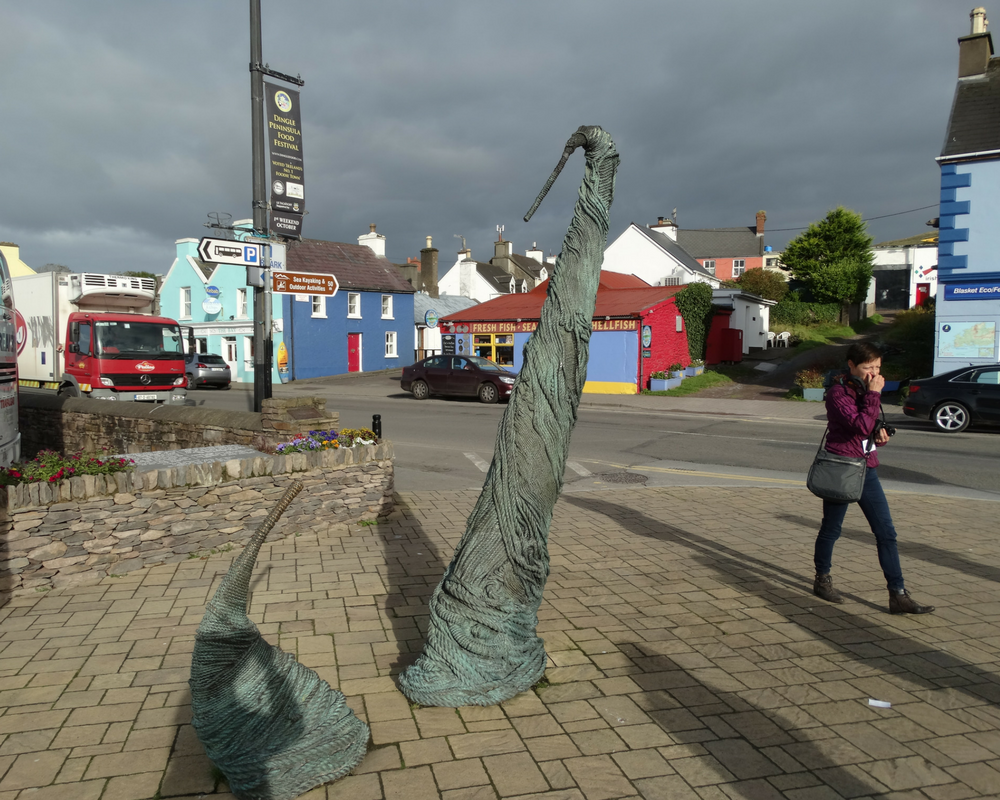 A Dingle Dolphin Tour is how I spend my first full day in Ireland. If wanderlusting was a verb it would be exactly this. Waking early to explore a place new to me, with a curious mind and a full heart, ready for adventure. Early that first morning when I still feel a need to pinch myself because I am indeed here, I set out to explore Dingle with a group of about 12 travel bloggers from around the world. The itinerary for the day describes starting in Dingle, boarding a boat for a dolphin tour to find a famous dolphin named Fungie, and sampling Irish whiskey at a distillery. Sounds perfect, right? Under grey skies, and buffeted by a chilly Fall wind, we begin. 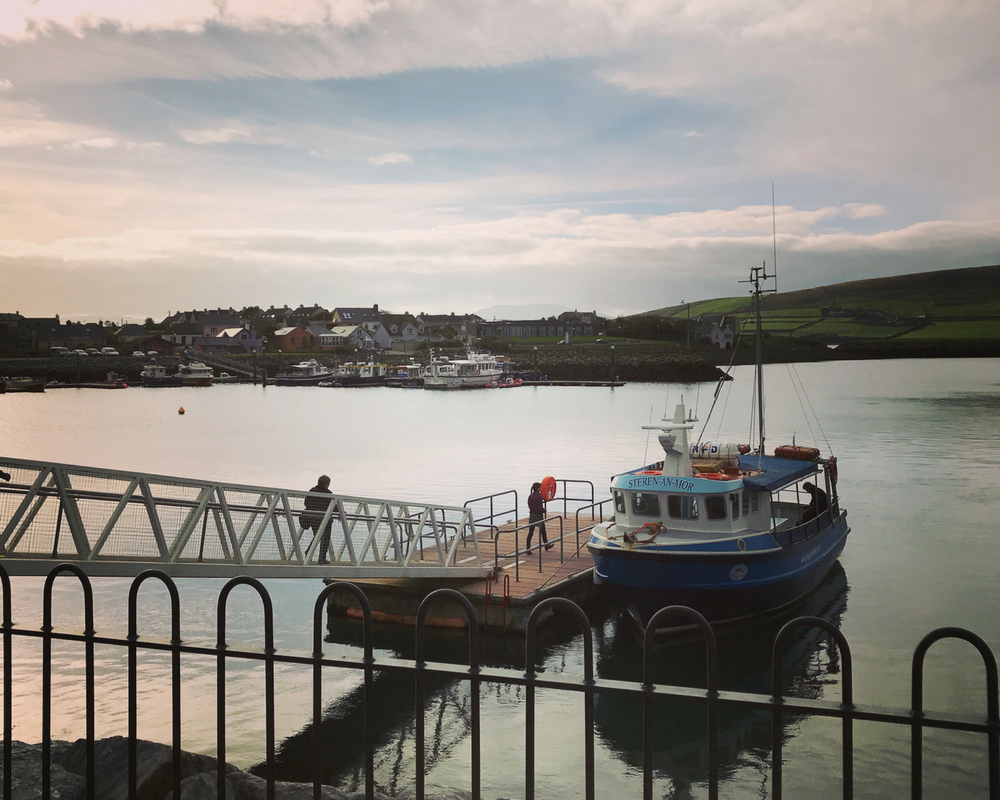 From Killarney, the Dingle Harbour is about 90 minutes down the road by a Kerry Coaches tour bus. Dingle Harbour awaits, and so does Fungie. Our Failte Ireland host is charming and funny and tells us he is thrilled to be doing this particular tour. He remembers taking part in the Dingle Dolphin Tour to see Fungie when he was about seven years old. Fond memories of a family trip to Dingle centred around seeing this dolphin and he’s vibrating with anticipation of reliving a portion of his childhood. If that doesn’t scream family friendly, then I don’t know what does. 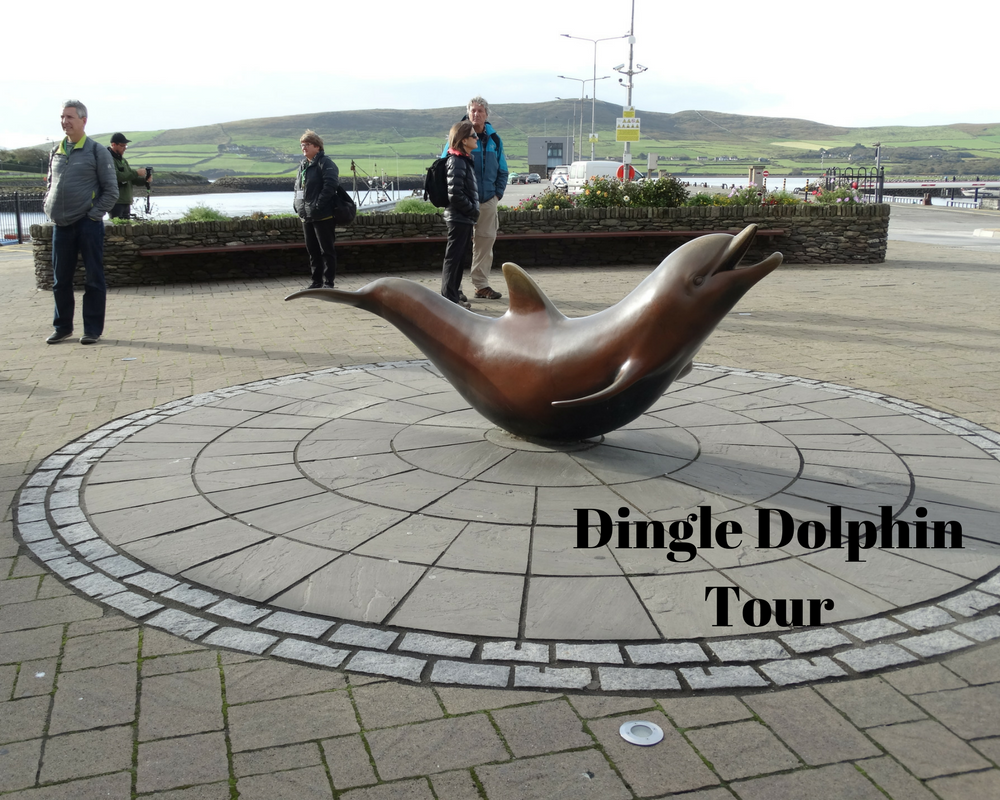 After a brief look around the harbour area we each descended down a ramp onto a small tour boat. On an overcast morning in Ireland we get our first look around. Grey skies threaten rain and yet somehow the light only seems to deepen the shades of green all around the shores. This is Ireland, a country with the greenest fields you could ever imagine, and some of the friendliest, funniest people I have ever met.

On the morning of their 25th wedding anniversary, husband and wife team Jimmy and Bridget, lead us out into the harbour to sightsee and search for the most famous resident of Dingle, a dolphin named Fungie. Jimmy and Bridget have been together for 28 years. Bridget moved to Dingle when they married and together they raised three children in the small town and they built the Dingle Dolphin Boat Tour business. Fishing and being on or near the water is a lifestyle here in this colourful town. Bridget and Jimmy’s oldest son now does sea tours as well. He takes tourists further out to sea to spy Fungie, with the additional draw of puffins and whale watching. 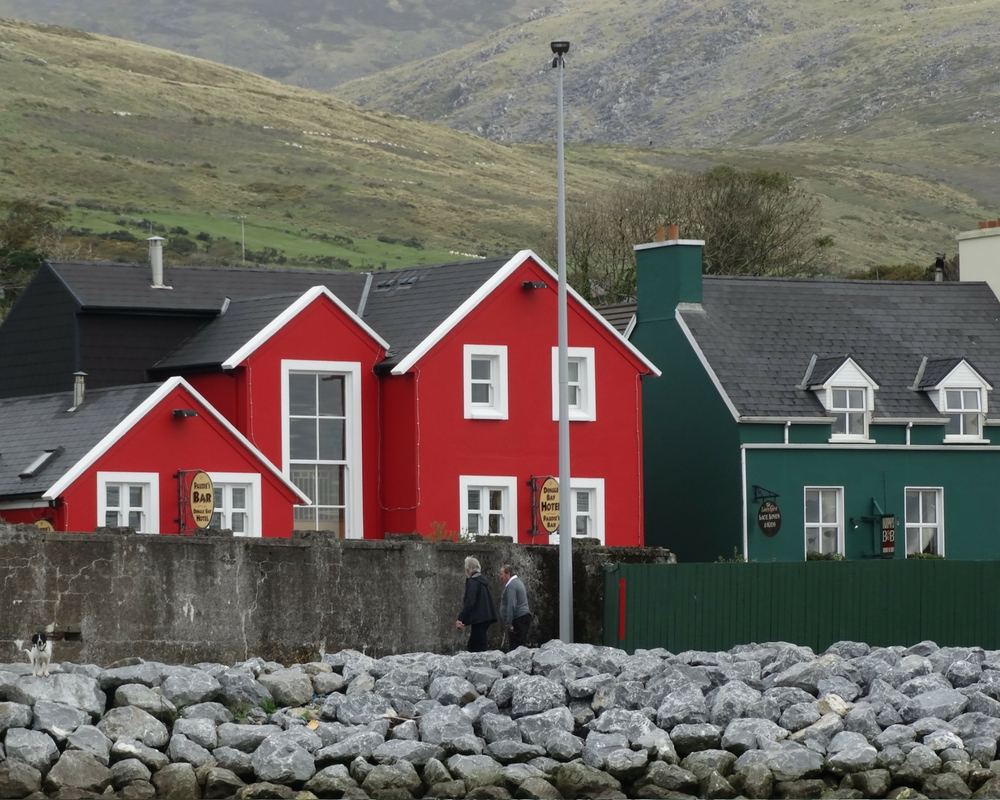 About a month ago I chose this hosted PreBEX tour, a pre-tour offered before TBEX Travel Blogger’s Exchange conference starts, because I relished the idea of being out on the water. Fungie was a draw for me, but so too was the sightseeing from Dingle Bay. From Dingle Harbour we see people kayaking and further out in Dingle Bay we have visuals of Valentia Island, Carrauntoohil and the Blasket Islands too. 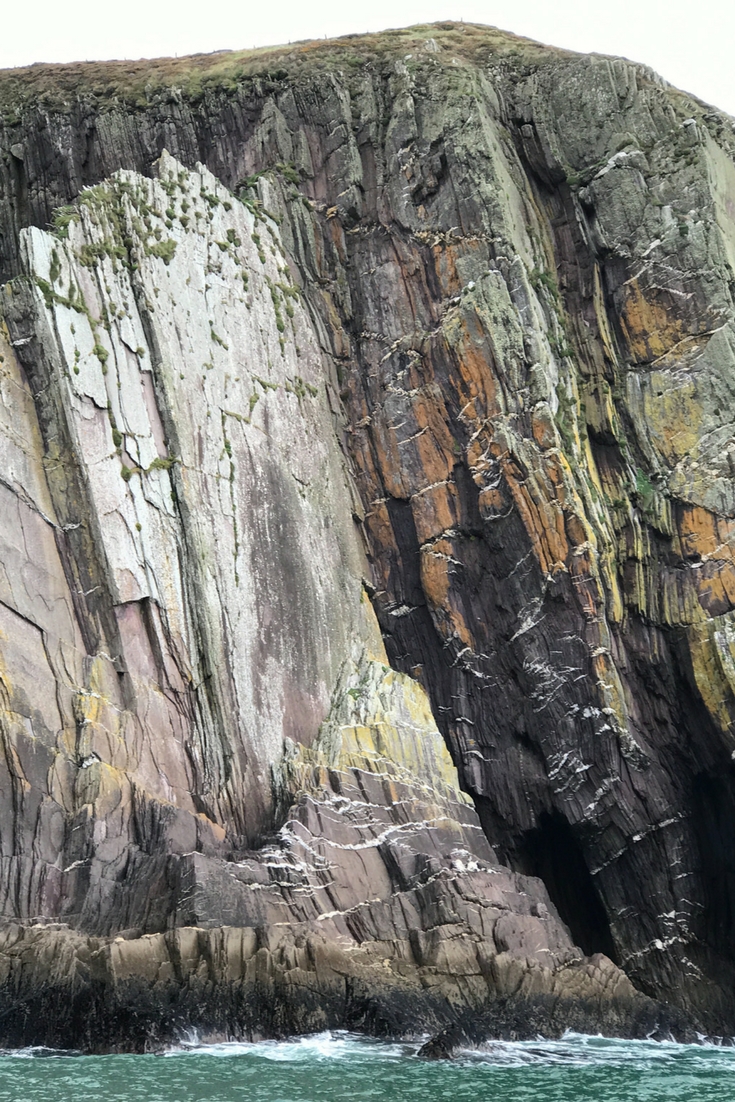 To one side the rock formations are gothic almost, as if created directly from CGI straight for the movies. When the environment is so stunning sometimes it’s hard to believe what you are seeing. You wonder if your eyes are playing tricks. Pretty much how I feel during my nine days in Ireland.

Although we are not able to get too close due to waves and jagged rocks, nobody can deny the cult appeal of seeing The Skellig Rock. Even from a distance everyone knows this spot as the place featured in the last Star Wars movie near the very end. It is magical, and ancient, and truly mystical looking, a surreal backdrop for Luke Skywalker’s hidden abode. 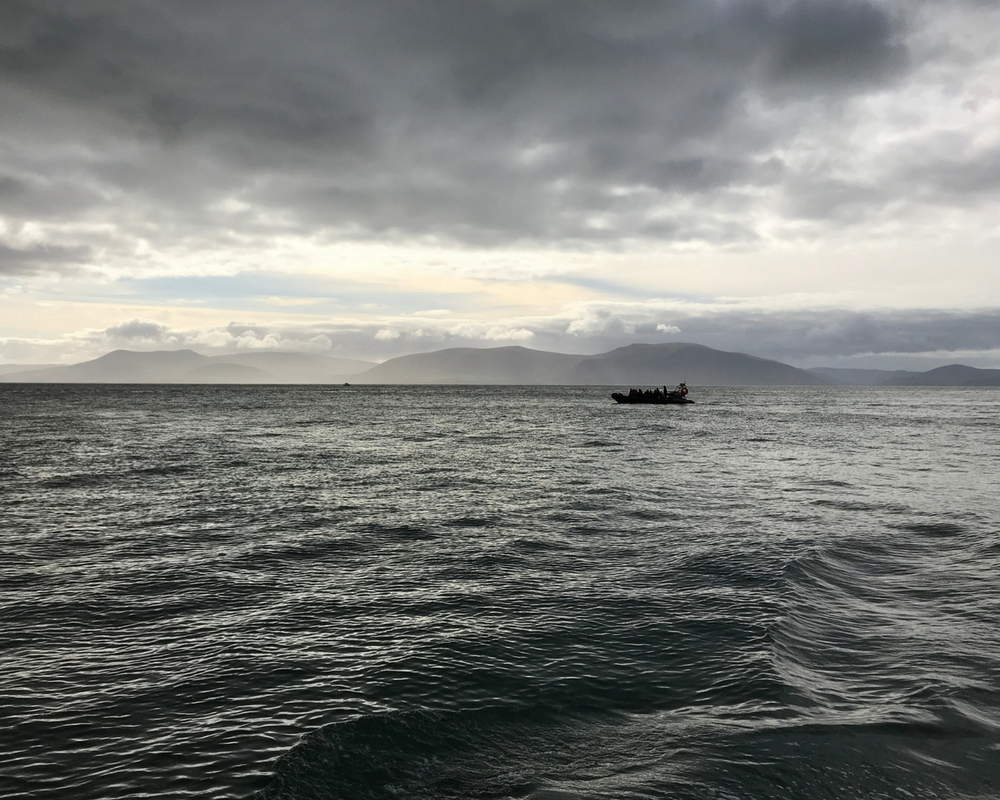 Thankfully you can see Skellig Rock from many spots in Ireland. We will have another chance to view it from a distance later when we take a Ring of Kerry tour. The TBEX conference itself is being hosted by Killarney which is a perfect base from which to explore a good portion of Ireland. 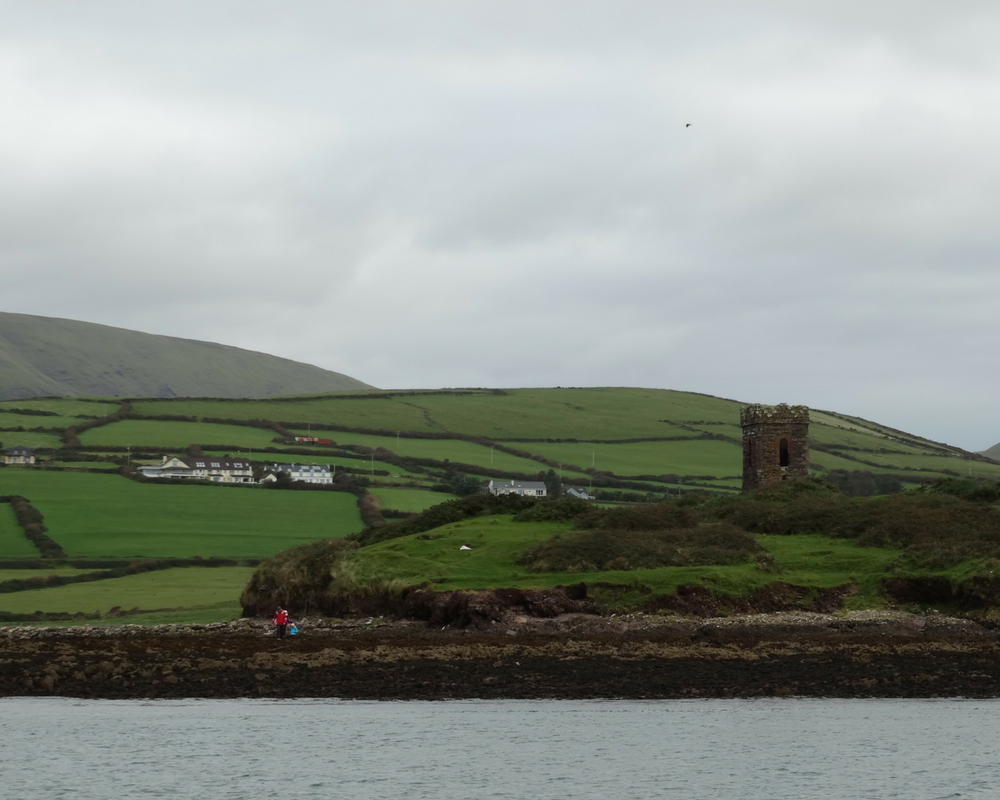 Tour guides Jimmy and Bridget are extremely knowledgeable about the Dingle area. We do nothing extraordinary on the water to lure Fungie. It’s not that kind of gig. Fungie finds people all on his own and seems to enjoy the spotlight. Bridget insists that Fungie knows the regulars in the harbour and shows up to greet them frequently. There are people who specifically return year after year to take their vacation on the water. 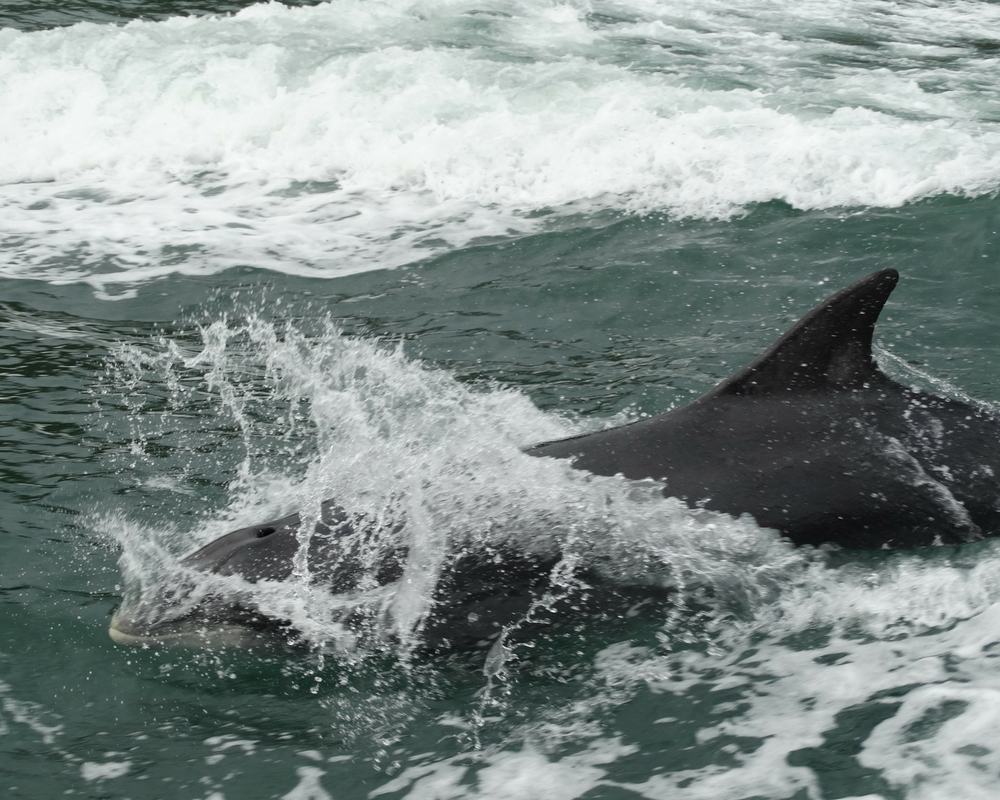 ✨ who have visited the area when they shoot on location nearby.

Brightly painted buildings in Dingle draw tourists inside to browse Celtic souvenirs, jewelry and clothes. Lunchtime fish and chips at The Boatyard? A coffee or a Guinness? There are a few options for lunch or dinner here in Dingle. We opted for The Boatyard and the fish and chips were excellent and also affordable. 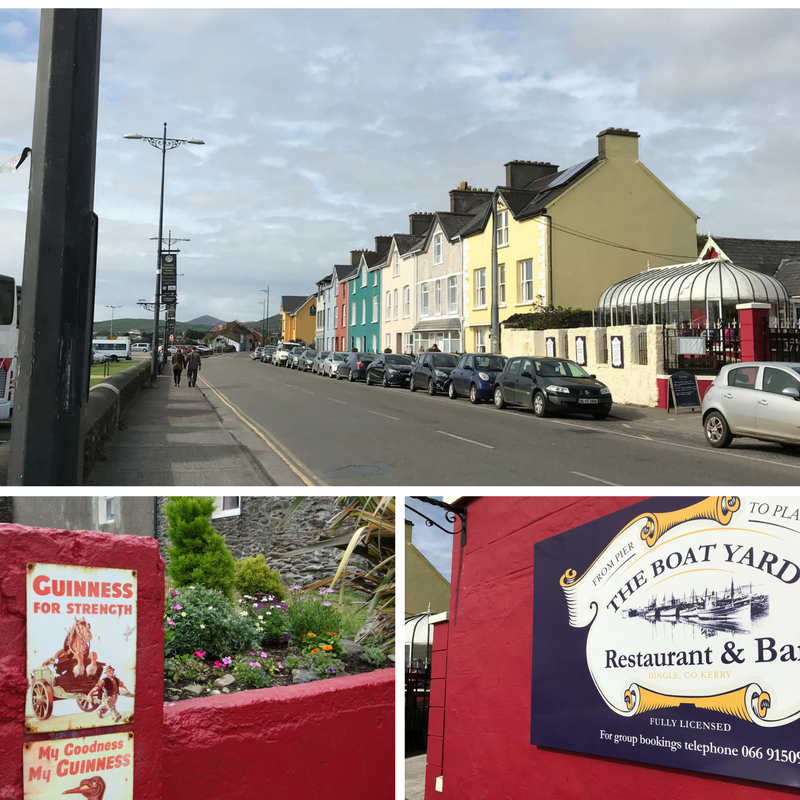 Follow that up with a tour of the Dingle Distillery and a sample or two.

😃 So much to draw tourists

🇮🇪here. If you are in the area book the tour and take time to browse local shops. If you are heading to Ireland make Dingle a stop on your journey. 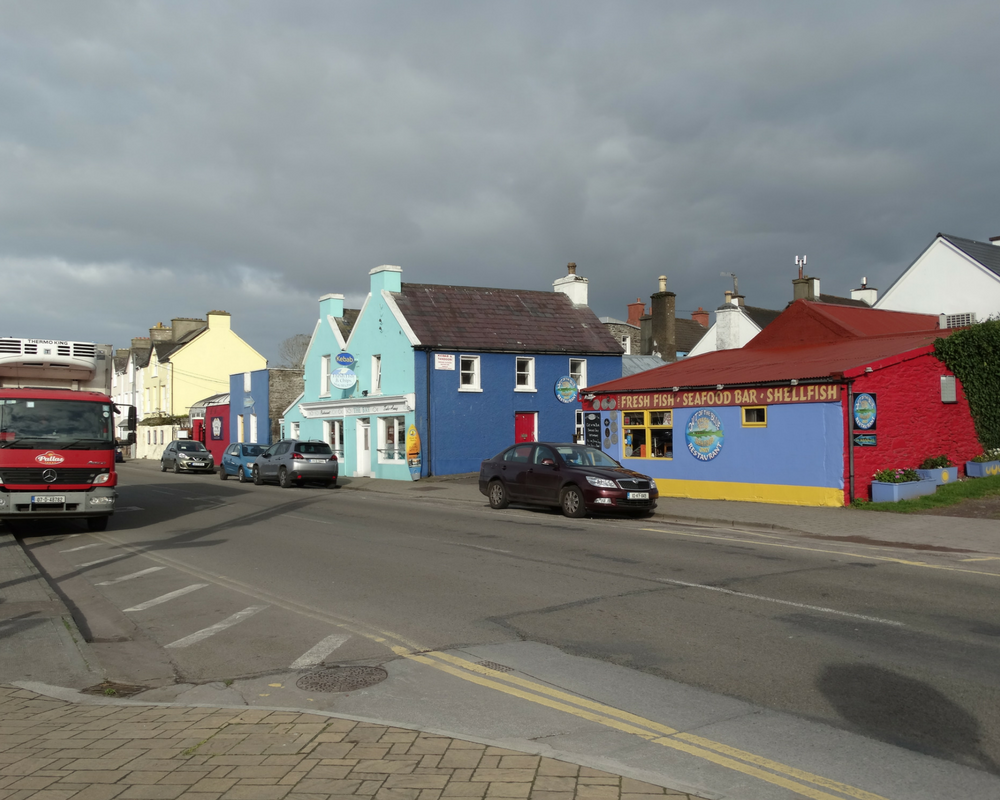 🐬 tour is a great way to sightsee and learn about the area and its history. 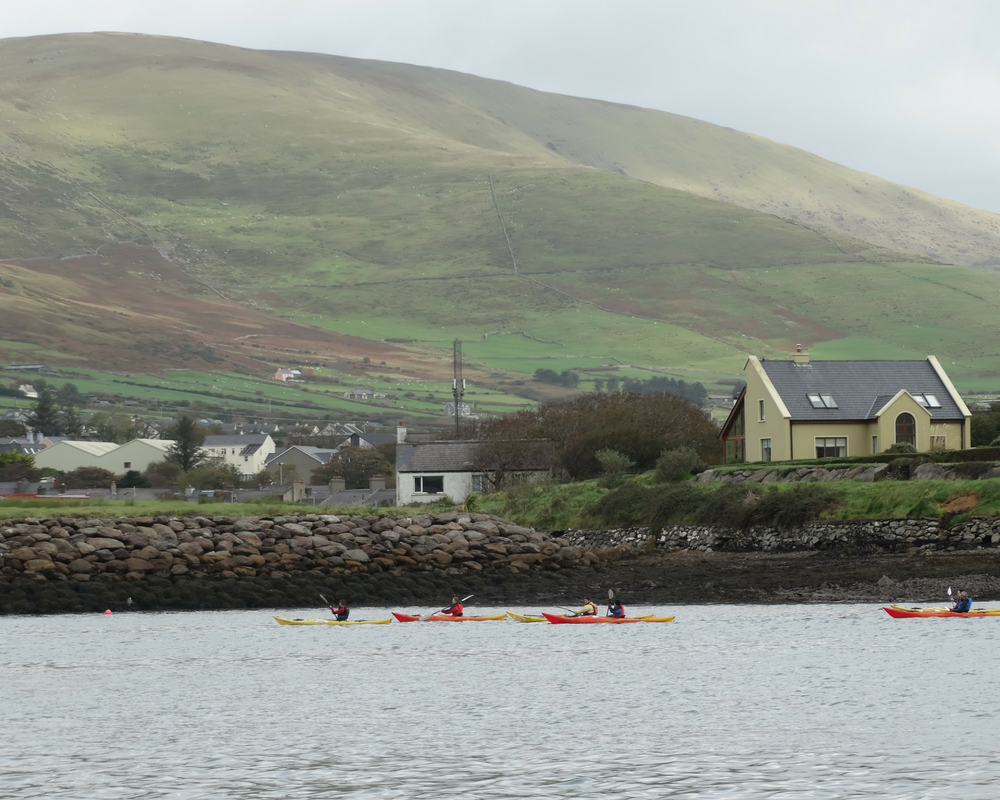 On the way back we paused briefly to take photos at Inch Beach along The Wild Atlantic Way. Surfers were waiting in the water for the perfect swell. Naturally they only popped up when we left. 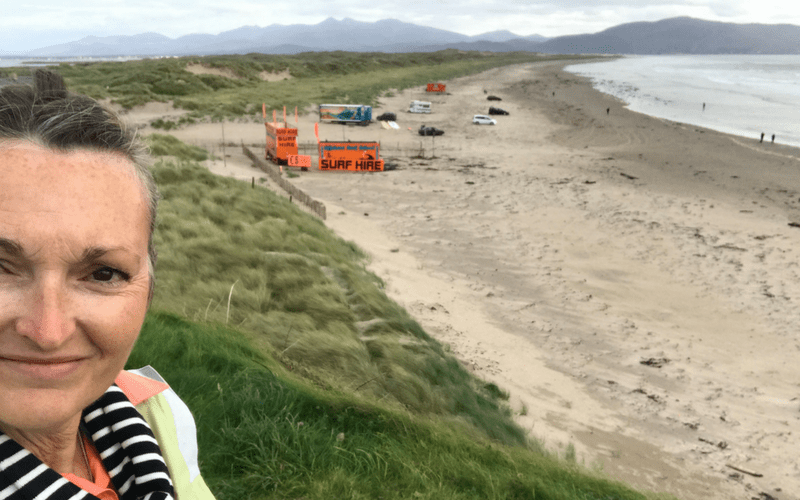 My first samples of Irish whiskey happen here at Dingle Distillery. The Dingle distillery is relatively new, having opened in 2012. It is located on the Wild Atlantic Way, a 2500 km stretch around the west coast of Ireland. Billed as an artisan whiskey and taking pride in their modest facility, Dingle Distillery also offers tours of the facility.  This distillery is clearly rooted in community and shaped by Irish history and prohibition. 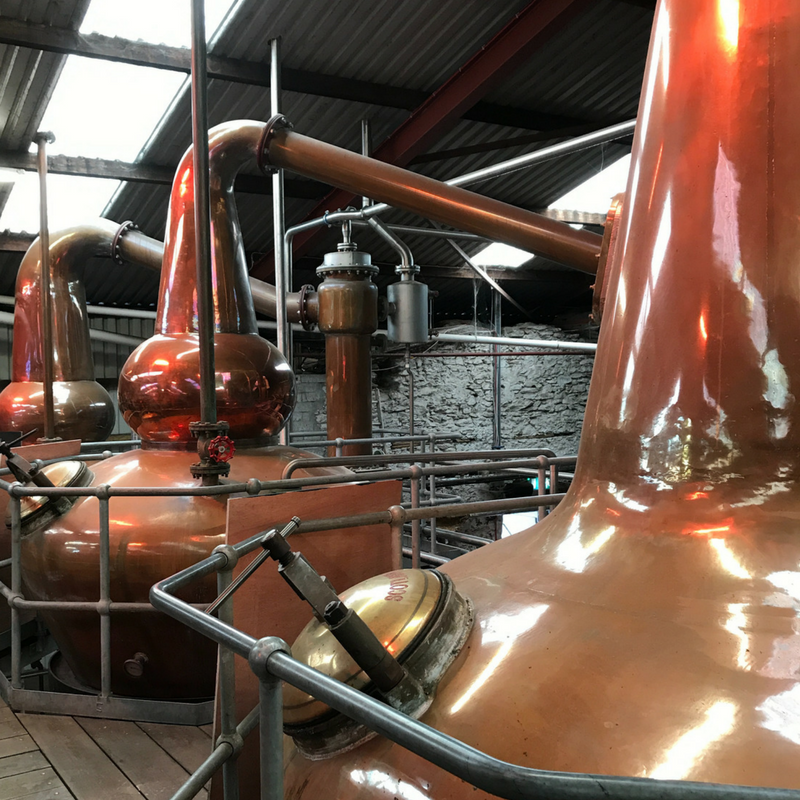 Anyone who spends any amount of time in Ireland will get used to hearing the story of Ireland’s distilleries. Two hundred years ago Ireland had over 100 recognized distilleries and at the turn of the century that number was as low as two. The Dingle Distillery is trying to recapture a small piece of that culturally significant business. 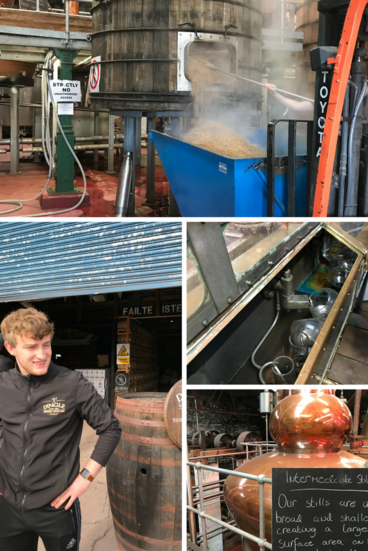 Dingle Distillery makes gin, vodka and whiskey. Distilling whiskey takes several years. Or I should say a quality Irish whiskey takes time, so in the mean time to maintain the business and make money between batches of whiskey, gin and vodka are also made.

The gin crafted here is rich with botanicals. The vodka and whiskey are also high quality. 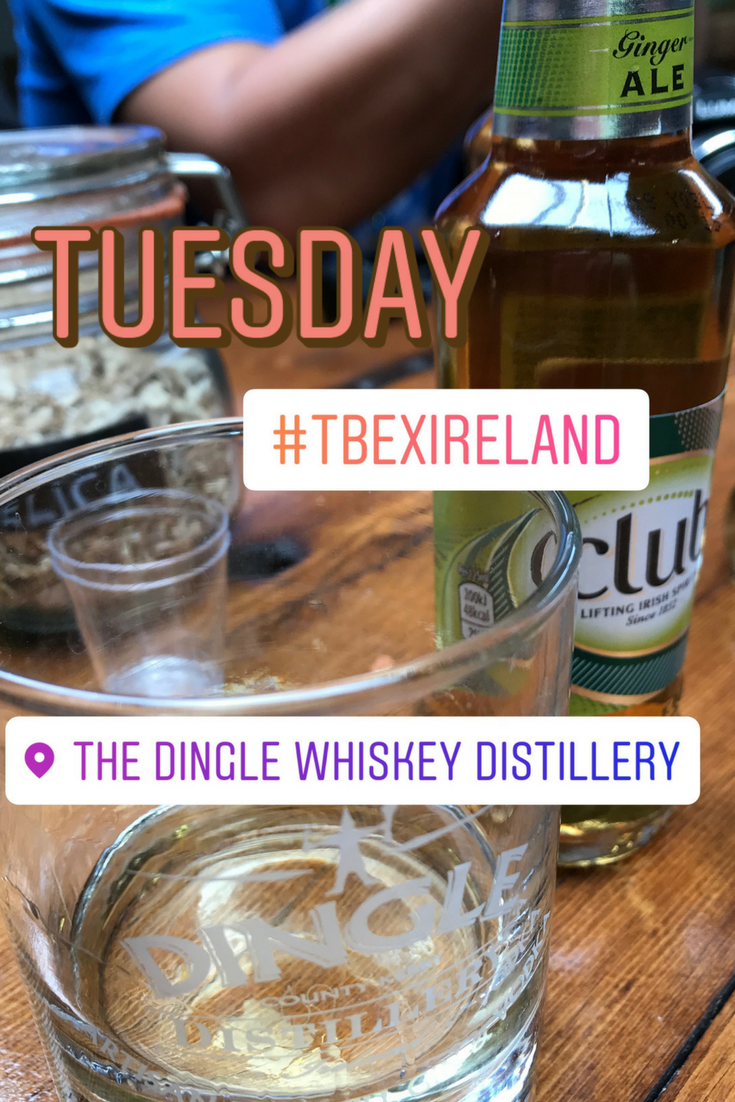 The Final Word on Dingle

A day in Dingle is well worth the time. Bring your camera, dress warm and I’d recommend all of it, but the whiskey tour, for families. Do the distillery tour if you are on a tour for adults. It could also be a great addition to the adventure if traveling with a group of likeminded adults, a partner or even solo.

I recently returned from Ireland where I was a guest of Failte Ireland on this tour and a tour of Dublin as well. The Dingle Dolphin Tour took place before TBEX began in October in Killarney Ireland. My opinion is all my own and it is also truthful. 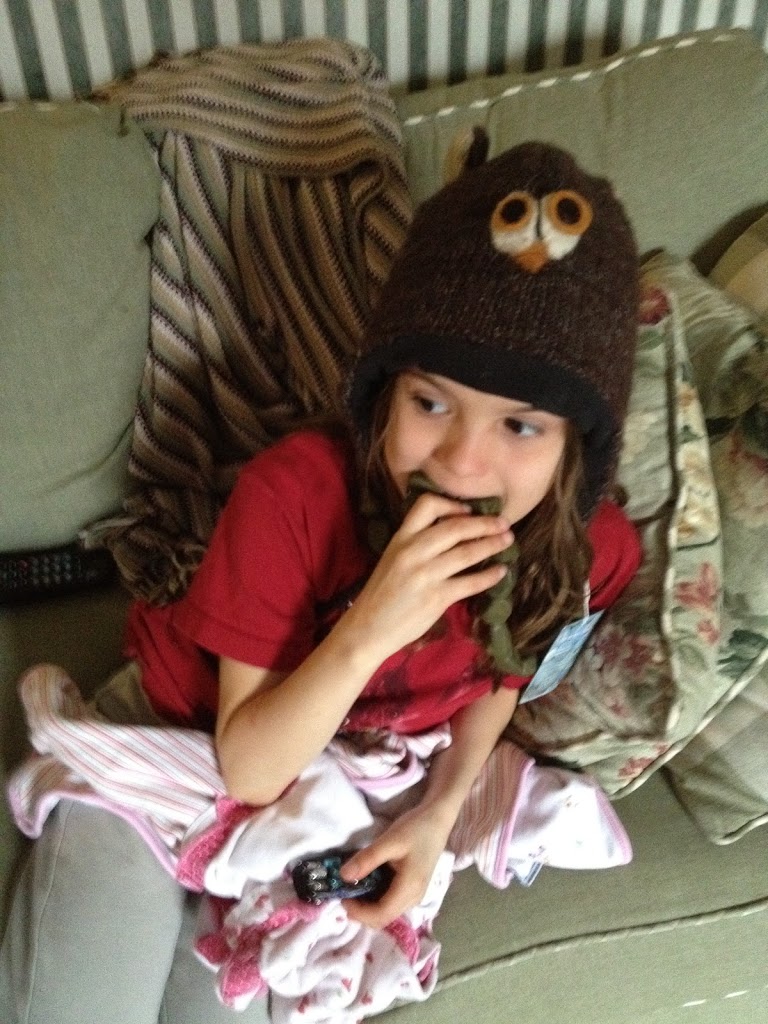 Teethease Necklaces and Teething Jewelry – Interview with the Inventor 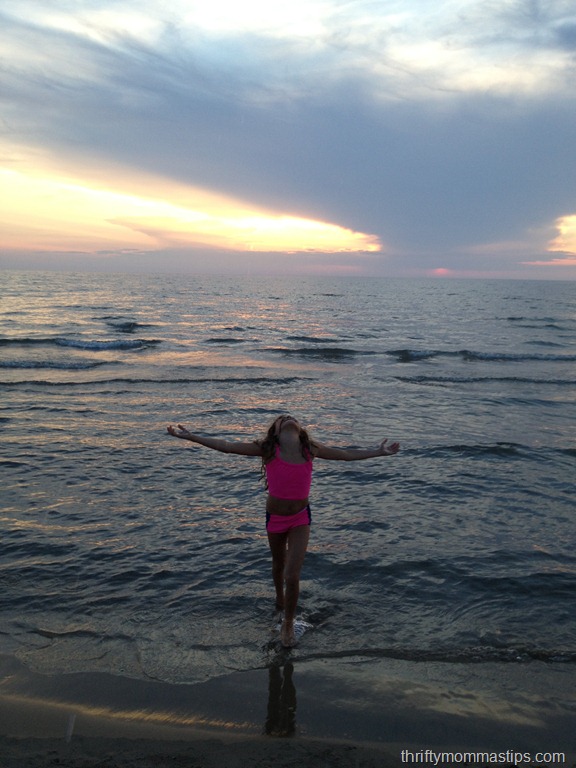 The Beach with Awe–#Wordless Wednesday 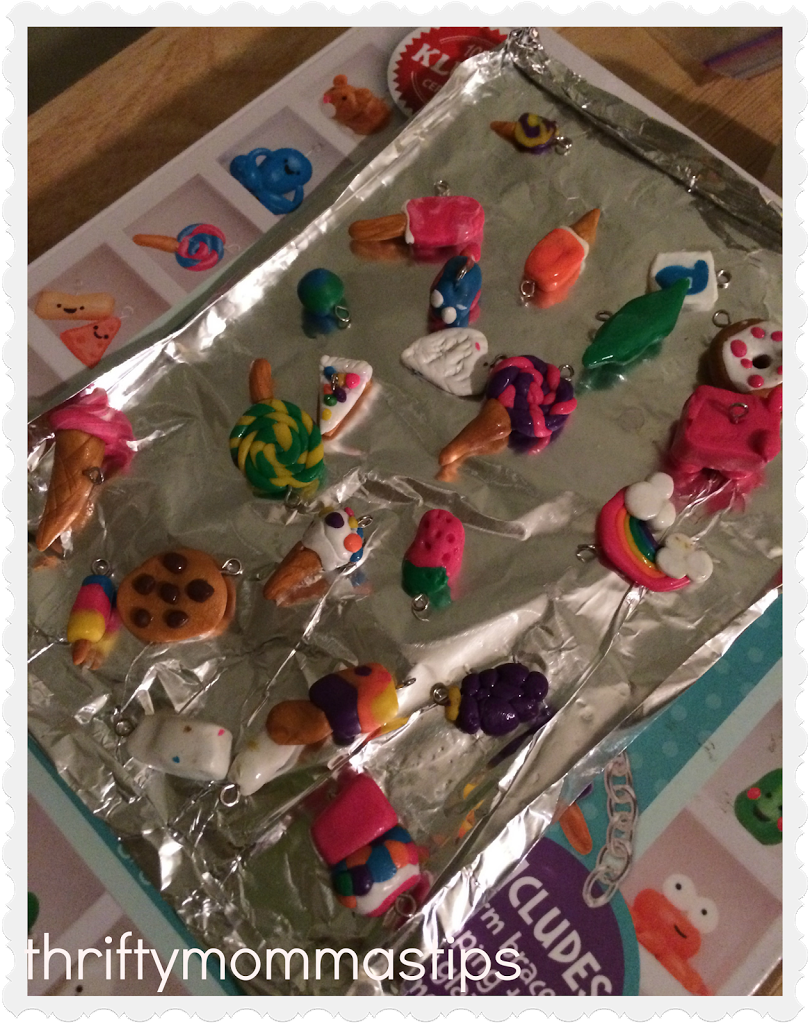