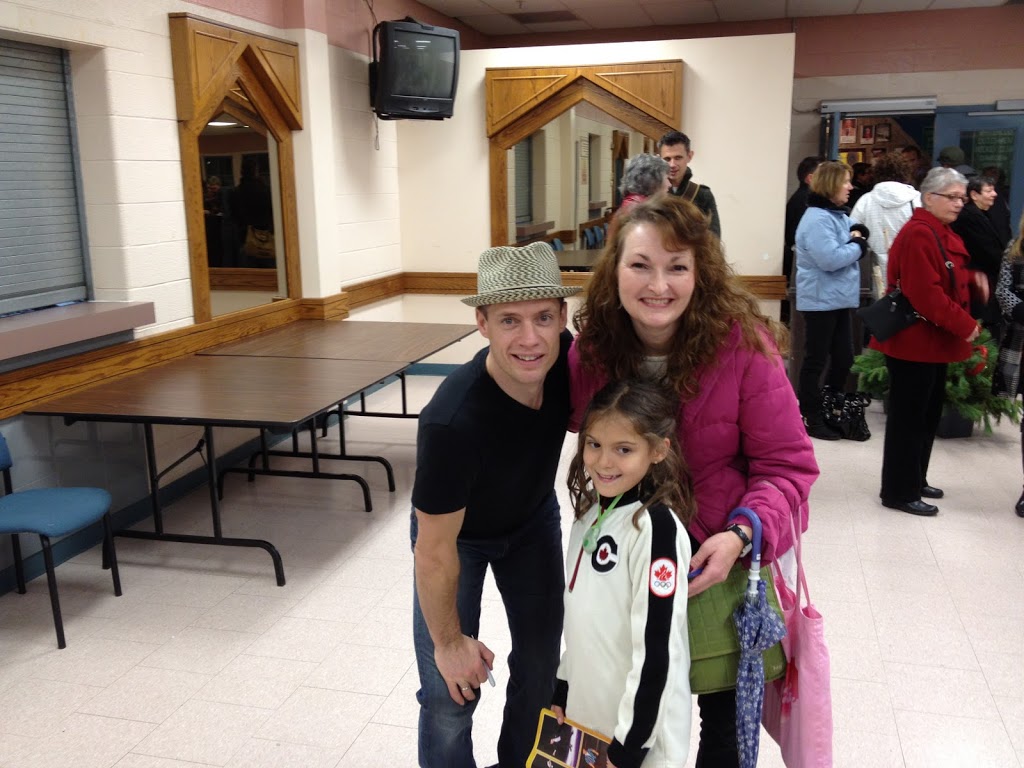 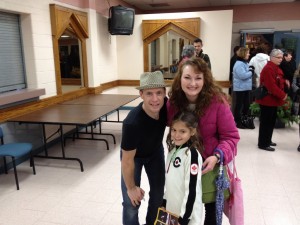 Blame it on the rain, but I have truly had trouble getting in the Christmas mode this year. Shopping. Meh. Christmas tree. Meh. Lights. Meh. Too overwhelmed by life this year to care.
At least until Sunday. This week I won two passes to see Holiday Festival on Ice, a skating show that was being held at the Kitchener Auditorium, a spot I haven’t been back to in years, since working in town over a decade ago. Anyways, the show was fabulous, featuring gold medal winners David Pelletier and Jamie Sale, and the incredible and very famous Kurt Browning, who liked my daughter’s sweater and was a really seasoned performer. I love that performing seemed to come so naturally to him, and he was at home talking to my daughter Ainsley, seven. 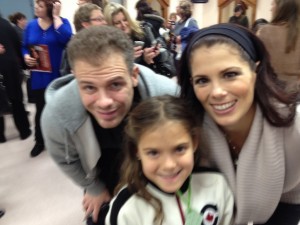 Ainsley with David Pelletier and Jamie Sale, who when they danced to Let’s Go Crazy by Prince, all decked out on purple outfits that were a bit saucy, brought the house to their feet in admiration of their grace and beauty on the ice. 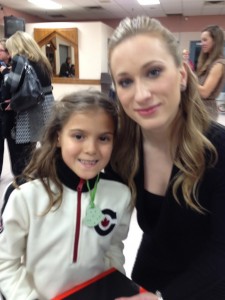 And who doesn’t love Joannie Rochette, even prettier up close than she is on the ice? And such an inspiration.  My older daughter knows well her story and followed her professional triumph and personal tragedy during the last Olympics in Vancouver. She is an inspiration for many girls. Skaters and non skaters alike. My kids like to skate. Ainsley skates like a professional speed skater wannabe – a bit terrifying actually. My husband skates like a former hockey player. Payton skates well enough and I muddle through, slapping the blades on to stay fit and hang with my kids, usually praying like the dickens not to fall on my arse, or stop suddenly. (Safe to say I have no grace on the ice.) 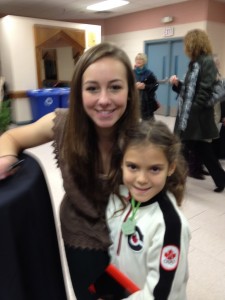 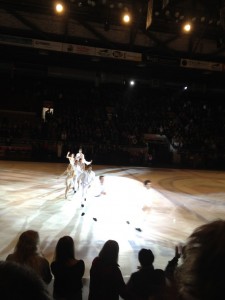 The finale of the show
As my kids get older I find myself seeking out a steady stream of fuel for their little souls. Not just food for their brains, or their bodies, but inspiration. Passion. I want my girls to find that thing that is their passion and follow it to the ends of the earth. I want them to feel inspired to do their best, but also to be the best that they can be. In the summer this year we took them to Kennedy Space Centre, a trip of a lifetime as we sat with astronauts and asked them how it felt to take off in a rocket ship. I was ecstatic to be able to share such an adventure and to be able to help them explore the space centre. My kids were blown away. They learned a lot and were well nourished. I hope they recall the experience years from now watching that last space shuttle Appollo being prepared before the final US space shuttle launch.
I want my kids to know that anyone can follow a dream. It is impossible to visit Kennedy Space Centre and leave uninspired. Even though it seems that it would never be remotely likely for a huge rocketship to be able to blast off into space, someone persisted – well a whole lot of someones really – and it happened.
Watching these skaters, Canada’s best, the world’s best skaters in a show performing moves that seem to defy gravity, well, the experience was a bit like that. Inspiring and magical.
Thanks to the Waterloo Region Record, the Aud and the City of Kitchener for sponsoring and hosting and for giving me the tickets, so I could get in the Christmas spirit. Thanks to the skaters too for the inspiration. The regularly priced tickets were very expensive $60 and up, so thank goodness I won the tickets, but the show was dynamite. I heard more than a few people leaving and stating that just one of those incredible flips was worth the price of admission. Oh and the senior’s tour group behind us unanimously agreed that seeing Jamie and David, Joannie and Kurt was priceless.
Where do you find inspiration this year? Who is your favourite skater? 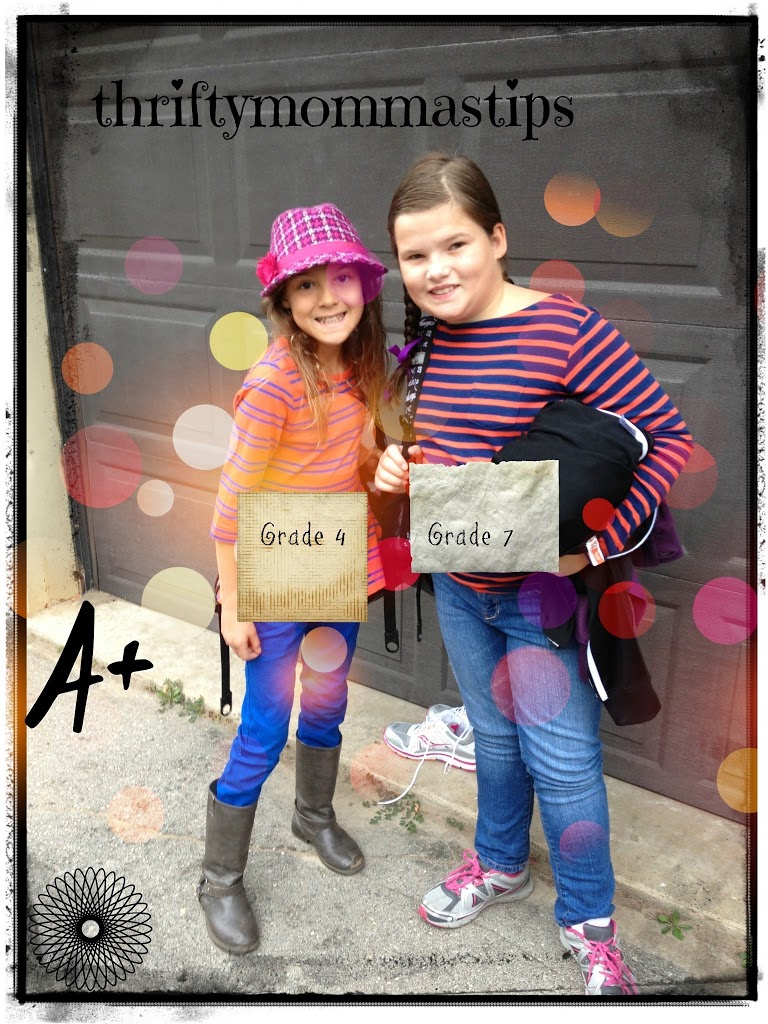 Back to School 2013 #wordlesswednesday Linky 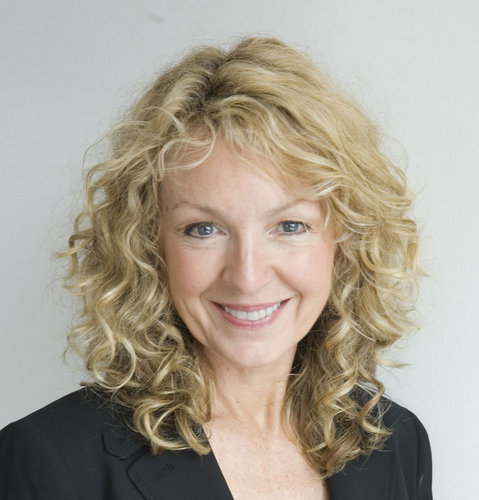 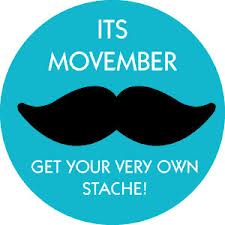