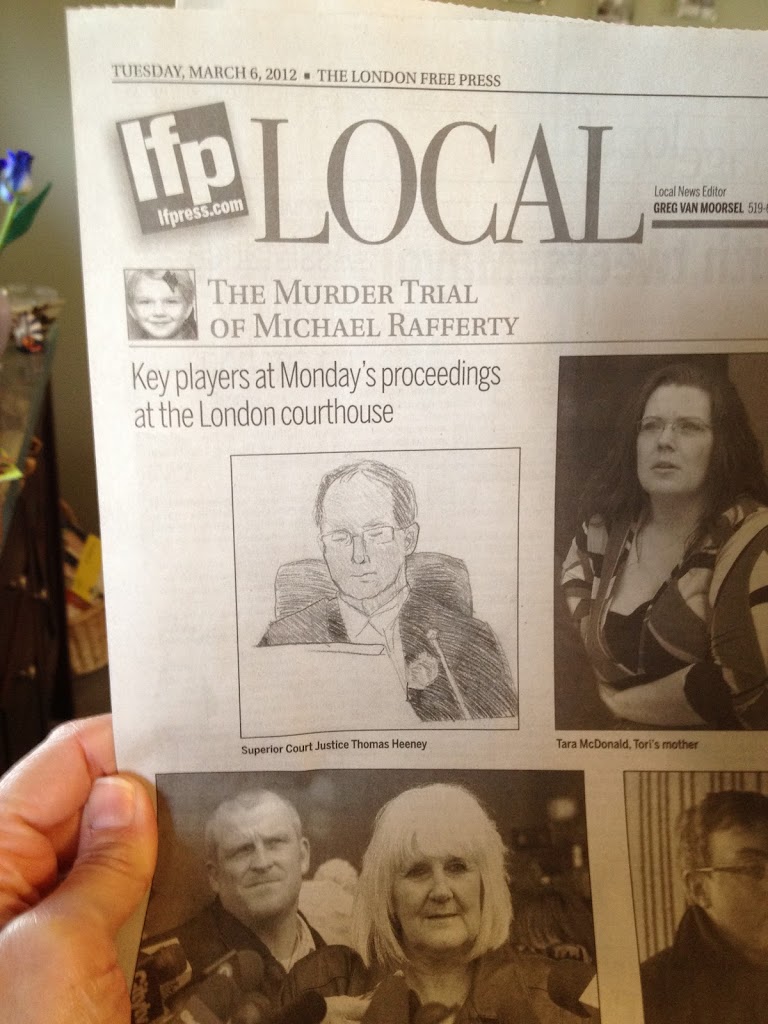 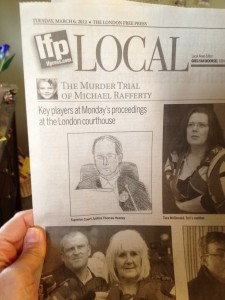 The last time I set foot in a courthouse it was for Happy Court. The term we use to describe the day when you finalize your child’s adoption. Yesterday, inside the same London courthouse the mood was as far removed as possible as the murder trial of Michael Rafferty began.

Today I am just happy to be here, working at home. Yesterday my number was up. Well, almost. On the first day of the Rafferty murder trial in London, when our local courthouse turned into a very busy hub of activity and media from all over Ontario descended into the centre of town, I was also slated to go to court. Dreaded jury duty. Shiver.

I arrived yesterday about nine a.m., just as some of Stafford`s family members were entering the court. The TV cameras and reporters sprang into action shooting footage of the pertinent players in the case and the bereaved relatives. Once in awhile I miss those days, but what a tragic case this will be and, as a parent with two girls, this case seems even more personal than any of the heartbreaking stories I once covered. In case you live in a different area and have not heard of this case, the trial involves Michael Rafferty, charged with sexually assaulting and slaying eight-year-old Woodstock school girl Tori Stafford in 2009.

Yesterday morning I was heading to the same floor where the Rafferty trial is taking place. I was searched at the door like everyone else and I emptied my pockets into the bins just like the press and public did on the way inside. But this time I was heading to a different room, across the hall from the two rooms being used to reconstruct a crime so terrible that many cannot fathom any reason that fits.  One courtroom is not enough and an overflow room is being used for many media members.

When I was a reporter chasing hard news stories for daily consumption I loved the life and the storytelling part of my job, but a decade ago I was not a parent. I wonder sometimes how those two things go together. I know many will think of the family at the heart of this trial. As they should. Our hearts all break for the mother, father and brother of Tori. Some people will think of media too, but when they think of the media covering this case, this sad story of Tori’s final hours, many will look down on the reporters covering the case. Some will think them annoying. Parasites even. Yes, it is the job. But here’s the truth: Hard to believe, but reporters are people. Like us. Like me. Doing a job. They are not unaffected. Many have kids, many will lose sleep over this trial. Many will live with something that comes close to resembling post traumatic stress disorder because of what they hear during this trial about a slain little girl, who could have been anything.

I wasn’t at court for the purposes of covering anything yesterday. I was a potential juror in another case. A different murder trial. I had to excuse myself from the jury pool because having a child with special needs means being on call all day long at her school. Jury duty, I have always thought, is a diversion, a job, I would actually embrace. The jury in this trial is expected to sit for three months. An entire spring time. I covered court once upon a time as a beat reporter, logged many hours of overtime covering murders in Kitchener and London too. I enjoyed that beat. It was a great backdrop. There are fantastic stories of crime, love, disaster, tragedy coming out of our courthouses every day. Happy court for adoptive parents, the last time I was inside a courtroom in fact, was for this occasion. Family court for sad dissolution of a marriage. And the criminal courts are for the trials like this one. The ones that make you realize there is a reason they are called TRIALS. For everyone involved. 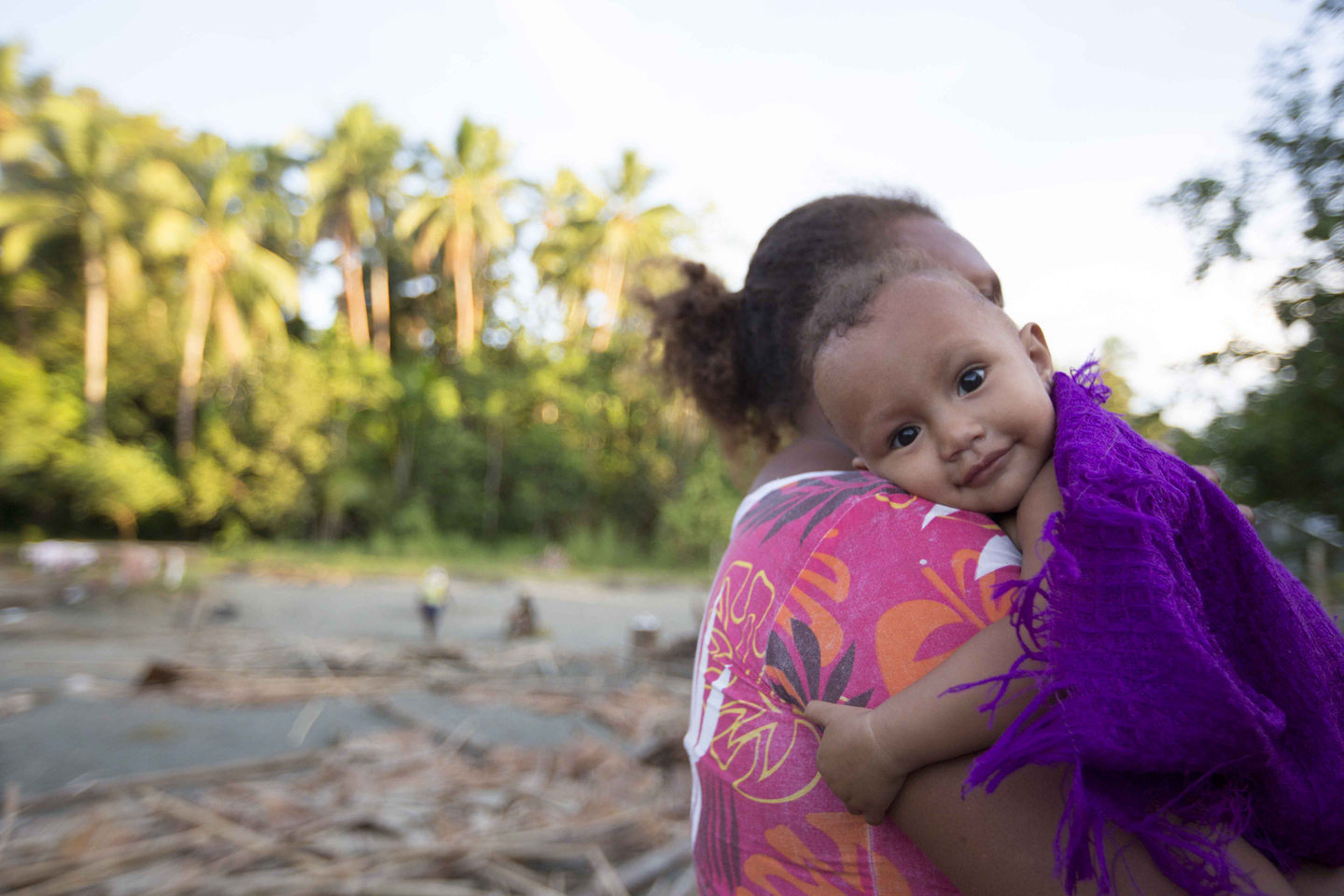 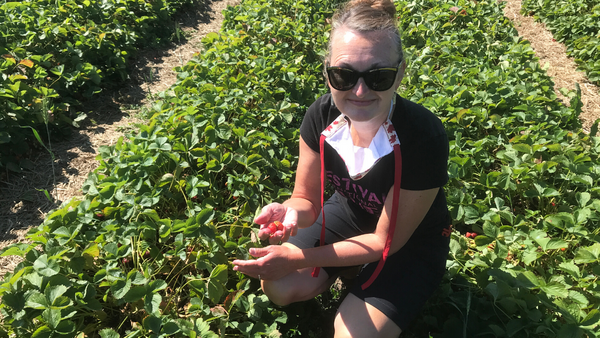 U Pick Farms Near London Ontario for Fresh Local Fruit